Walking with a friend who also writes their own blog risks repetition for people who are followers of both. As we walk we tend to take similar photos of the same  points of interest, and our posts will inevitably include similar accounts of incidents.

Today's walk was covered by Bowland Climber in his post which conveys a vivid account of the whole walk and I recommend this to my readers here, and also use it as an excuse to omit an inferior detailed account myself.

My thoughts on this trip major on the number of stiles. I am sure I don't exaggerate if I say there were more than twenty. With my twin knee replacements stiles are more of a challenge coupled with a heightened fear of slipping or falling. Many stiles today were in bad repair with wobbly planks, often coated with green slippery mould, ergonomically too high to conquer with comfort, and in perhaps a majority of cases doubled due to stream or ditch crossings. BC is very patient when I tackle these obstacles, taking more time than sprightly, less than seventy year olds.

For  a couple of years now I have walked in Gortex or similar lined waterproof trail shoes rather than boots only using the latter if I anticipate pathless, rough, moorland terrain, and I have  rarely suffered wet feet. It is surprising how that can be achieved with a  little care. Today we had several gloopy sections and one in particular where you may see a photo of of me on BC's post looking as though I am on the point of sinking up to my waist, but despite appearances on the photo my feet remained dry in my Mountain Warehouse trail shoes.

Despite my grumpy stile comments and the muddy conditions the walk was enjoyable in good company and the route is improving as we move further east. 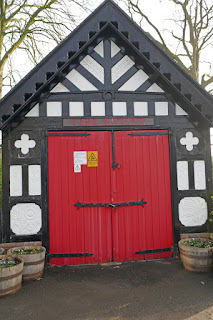