Around Nicky Nook with BC

After yesterday's exertions in the rain I was just fresh out of my hot bath when the phone rang. Bowland Climber was suggesting a walk around Nicky Nook tomorrow. He said afterwards I hesitated before accepting. That is probably correct - I was still in recovery mode, and also I have walked around Nicky Nook on several occasions over the last few years. Before that it was a favourite outing to drag my unwilling family up to the summit when we lived in Preston.

Back in 2004 a local brewery were naming a new ale as Nicky Nook and tried to find the origin of the name. From the Lancashire Telegraph:

"...but despite talking to villagers in Scorton and scouring the internet Bowland Brewery is still none the wiser. Julie Collinson, proprietor of The Priory Hotel, in Scorton, is so keen to solve the mystery she has offered dinner for two and samples of the new beer.
"We'd love to hear from anyone who knows how Nicky Nook was named and the prize will go to the most interesting and amusing story, not necessarily the most credible..."

BC had warned me about crowds in Scorton; he had identified parking in a lane just to the south beneath the M6. Rain showers were forecast but we avoided them all except for a brief five minute spattering as we sat on some large culvert pipes for our mid walk munchies.

We were away at 9:30. Practically all of the walk was, much to my surprise and enjoyment, new to me allaying my thoughts that we may just be covering old ground. By now I had thankfully found my boots in the garage from yesterday, and after some attractive autumn lane walking we were squelching through muddy fields complete with more serious quagmires at the gate entrances. We were then back onto other lanes and we seemed to have been climbing forever until we came out onto the road skirting the base of the Bowland hills giving us views and reminiscences of various treks through that terrain.

We had seen only the odd person, but now looking down to the road there were many cars at the popular parking spot which gives access to climb Nicky Nook. From hereon there were continuously more people. about.

Despite the waterlogged fields this was an attractive and enjoyable walk, the first since 16th of September with BC. 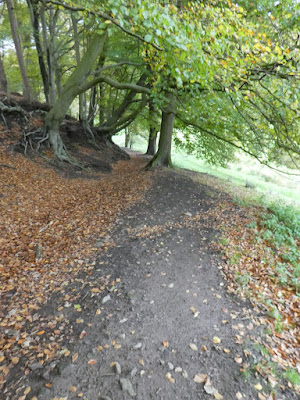 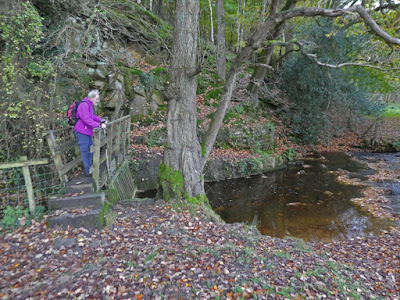 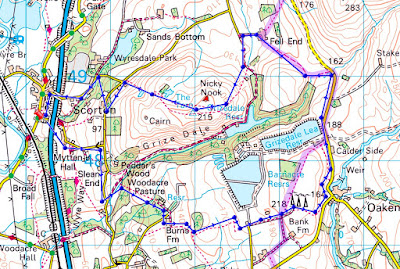