I have been deprived of outdoor activity recently to the extent of promising myself I would go out this week even in bad weather. It was bad.

It was only while breakfasting, looking out at the rain I decided.

Knowing I would need my best protection I went to where my Rohan Barricade (waterproof) trousers resided in my bedroom, not used since last winter. They were not there. It was late to be setting off with a longish drive so I grabbed Paramo trousers instead. I knew my boots were in the garage. They weren't there. No more time to mess about searching. I put on the Mountain Warehouse trainers, chucked a flask of coffee in my rucksack and off I went, only stopping at our local bakery for a lunchtime pasty.

I drove through heavy rain and spray down the A65 to Long Preston and set off walking still in the rain. It was bad enough to restrict me to only five photos all day.

A lane out of the village became a footpath across a series of squelchy fields. Some navigation errors followed. At one point I needed to cross a drystone wall which was already down to less than half height over a length of about four feet with a pallet propped up to close the gap, but the pallet was ajar enough for me to squeeze through onto the remains of the wall which instantly collapsed even more. I can't ever remember damaging a drystone wall, an unforgivable crime in the dales. I managed to retrieve the pallet and prop it back up giving perhaps better defence than its original positioning. I have to say I was not happy with myself but at least I did my best to sort it.

After descent into a ravine and a footbridge with a steep ascent out the other side I was out onto access moorland. Contours on the map and my visuals indicated a direct compass bearing on the summit. I ploughed and climbed through thick reeds and tussock grass. Not far from the final rise to the trig I found a mown quad bike track which I was able to use on the descent cutting twenty minutes off the ascent time. The continuing rain didn't encourage me to linger long.

It was past eating time but my pasty and coffee were saved until I was back at the car.

More driving took me to the other two trigs, both were less than two hundred yards off the road in fields with no public access. My Paramo jacket and trousers had kept me dry underneath but the trainers succumbed as I neared the first summit and I had the enjoyable freedom after that off just sloshing through everything regardless. With good clothing I was well protected and whatever one may assume this had been a welcome and pleasurable change from the routine of domesticity I seem to have been under lately. 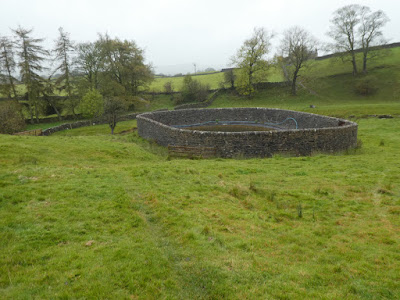 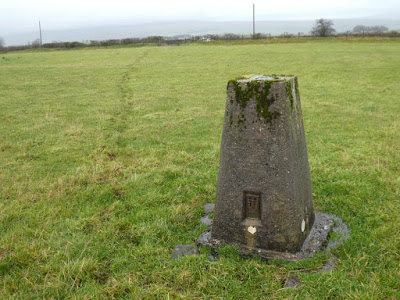 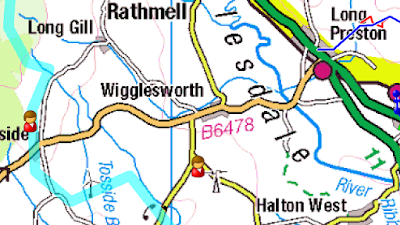