Recently a series of situations, appointments and bad weather have conspired to keep me from my enjoyment of walking and exploration. Partial Lockdown and the above mentioned sends one down paths of exploration digital. Somehow I found myself looking at You Tube videos of model making, something I did quite seriously as a young teenager but not since. A kit for a Land Rover took my eye; it happened, coincidentally to be in the same colour as the short-wheel-base I used to own and also it was the same Series 3 from circa 1973.

There are 184 pieces. Progress is slow but absorbing but not very demanding intellectually, although there are odd moments interpreting the pictogram instructions.

When I made the move my son sent daughter a message just saying "Dad's bought a Land Rover." The reply, with its hidden inference: "Is he keeping the Kia?"

I had an airbrush for a number of years and sold it on Ebay about three months ago. I have now bought another. The all too frequent rule of life had struck again:

The shorter will be the period of time that you find the need for an item you had kept in case it may "come-in" after you have disposed of it is inversely proportional to the length of time you had kept it.

I think I got that right but someone with a degree in logic may wish to challenge. Anyway, you get the idea.

If you click to enlarge, which I recommend  you will see areas where the painting has been missed but it looks like realistic distressing - the model is not necessarily supposed to be just out of the showroom. 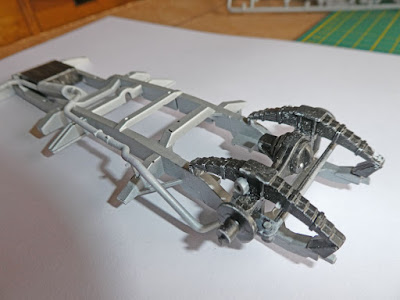 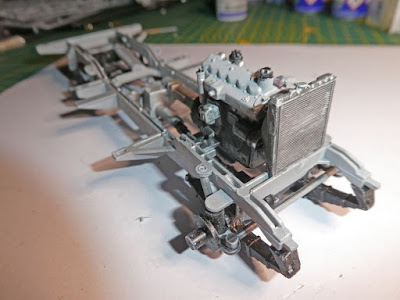