Bond, a Javelin, an Enquiry, and a Tree

I recently decided to re-read some James Bond. I read them all as they were published from 1955 onwards. I decided to start at the beginning with Casino Royale

My memory, probably now coloured by the more extravagant films, was of a swashbuckling hard man with many technical and physical attributes enabling him to fight and escape and generally to be the consummate action man and successful lover.

The first shock came when I read “Bond lit his seventieth cigarette of the day…” Many characters smoke which is used to portray an image of macho-sophistication.

In this book Bond is a loser.

Bond looses to Le Chiffre at Baccarat and is only rescued from  disaster when the American secret service bung him a huge amount of money to continue.

Bond's beloved vintage Bentley is wrecked in a car chase where Bond is the loser and is captured.and   tortured. He is only rescued by outside agencies rather than using his own skills. He has to spend several weeks in hospital recuperating from serious injury.

Bond's attitude to women was unacceptable for me, and especially in the context of more enlightened attitudes today. In the first part Bond talks of women lasciviously and carnally as items to be used and discarded as and when needed, and elaborates on their propensity, in his opinion, to get in the way of men’s doings, and thus demanding time to be safeguarded and/or rescued. That becomes tempered later in the second half of the book when he falls for Vesper and his thoughts are turning to marriage, but again he loses when that relationship is doomed.

There is a fair bit of introspection and character building and philosophising in the second half of the book which majors on his relationship with Vesper after all the action has taken place in the first half.

“Today we are fighting Communism. Okay. If I'd been alive fifty years ago, the brand of Conservatism we have today would have been damn near called Communism and we should have been told to go and fight that. History is moving pretty quickly these days and the heroes and villains keep on changing parts.”

Perhaps Fleming could have continued portraying his character as the incompetent secret service agent, but from memory I reckon the later books did the opposite.

I have lampooned the absurdity of Government enquiries (instituted by all political parties) a few times recently. I haven't researched the detailed  progress of the enquiry into the Croydon Tram Crash. But just the fact that it happened in November 2016 and the enquiry only reported a few days ago after four and a half years at a cost of goodness how much to the taxpayer is cause for concern and some explanation of why it takes so long. After all, I guess it was known at the outset what happened in broad terms and the enquiry should only need to confirm detail and assess for blame and make recommendations for the future. Surely that shouldn't take over four years?

A new one is creeping in. When an athlete or team  has just made some specific move commentators are saying they have "pulled the trigger." Such things I find quite witty the first time I hear them but become  irritating thereafter. Copycats.

Photo below. I was puzzled about the spelling of the manufacturer's name but Wikipedia came to the rescue:

"Founded as the Gloucestershire Aircraft Company Limited during the First World War, with the aircraft construction activities of H H Martyn & Co Ltd of Cheltenham, England it produced fighters during the war. It was renamed later as foreigners found 'Gloucestershire' difficult to pronounce. It later became part of the Hawker Siddeley group and the Gloster name disappeared in 1963." 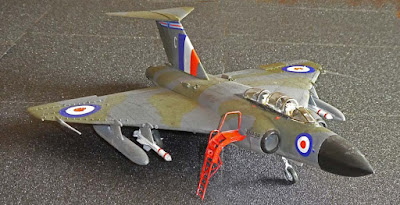 This little painting looks naive but the composition and colouring are I think complex and satisfying. I can sense the movement of those falling leaves. 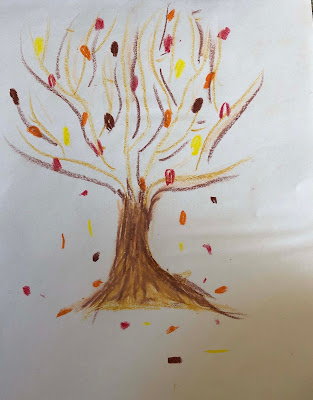