There was a modest sea fret from the start today which restricted views but walking temperature was perfect. We drove to Aldbrough from where our Grid 38 line continued another two kilometres to a point on the coast named East Newton. We had researched to find there was a caravan site there and we hoped we would be able to park. On arrival there was nobody about. The site didn't look to be operating and everything was in a run down state. "No parking" and "private"  notices were numerous and we had a bad feeling about parking in any way that may be marginally disapproved of. We drove back up the road to Low Farm where we had a friendly reception and permission to park. I had always thought it would create an anticlimax if we were able to drive to a point where we could  see the finish before we had walked  there so I was  quite pleased about this - we had not been able to see the sea.

We drove back to North Ellerby and set off on quiet lanes. There was not much to report. At one point there was a mountain of chicken manure on the side of the road and BC was all for making the ascent but retreated after a few steps.

Further on a tree was growing in an old bath near a farm. I have been amused by farmers' use of baths as watering troughs in the fields.  I can imagine the farmer telling his wife it's time for a new bath when he finds he has need for yet another in his fields. Seeing the tree in the bath here I wondered if the field baths are eventually allowed to be retired as they often do with horses, and then treated to a planting up of something for them to enjoy?

A couple approached from the other direction with two crazy spaniels. They were locals on a regular walk and we chatted as the two dogs never stopped chasing up and down - spaniels do have an endless capacity for just having fun - great to see.

We walked through Aldbrough where there is an unlikely shop dealing exclusively in second hand lawn mowers. We found the church which has an original tower dating back to the 14th century constructed from rubble that has stood the test of time against the odds. We found a bench in a sheltered corner to have our lunch.

We walked past our farm parking spot to the end of he road but we could see a fisherman walking down on a path from the farm on the cliff top. We took our path from the road and after a few hundred yards we were at last looking out at the North Sea as we stood on the top of a forty foot cliff.

We tracked back to one of the private notices on a gate to try and find where the fisherman must have descended to the shore and we found an excavated trackway leading down to the beach. Using GPS we walked on a couple of hundred yards so we were exactly standing on OS Grid 38. We drew a line in the sand  and took photos then went off and dabbled in the sea.

Walking back up we chatted with the fisherman and got the lowdown on the dubious run down caravan site owner. He has a bad reputation for being unpleasant, uncooperative, and fanatical about trespassers, and we had just walked through his gate with all the notices. We found the clifftop path back to our farm and our car. We had a long friendly chat with the farmer and his father and his young son. Dad had set the four year old up with a lot of free range hens and the lad was said to be already earning over £20 a week -  not a bad start in life. We both bought eggs and then went off to retrieve the other car at North Ellerby and face the two and a half hour drive home. I arrived home about 7:45 with a good bottle of red, some artisan bread and some paté in time to chill out and reflect on a thoroughly enjoyable and satisfying completion of this project. 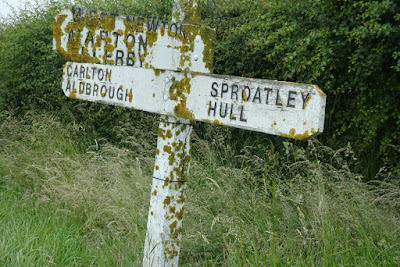 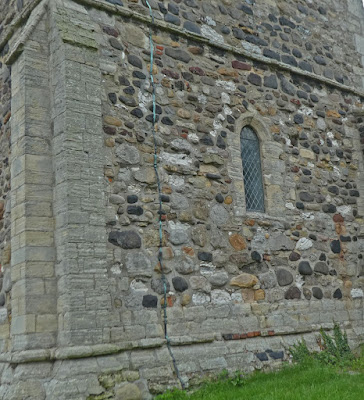 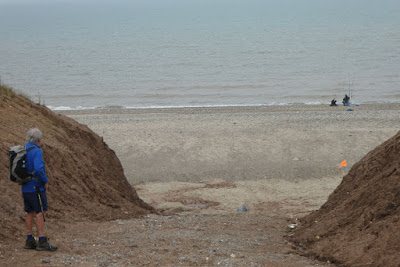 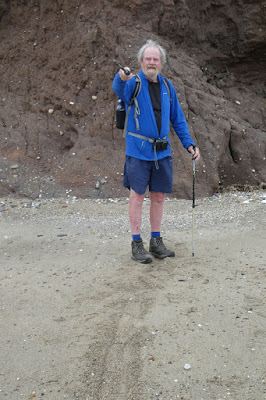