I do enjoy walking with friends but one advantage when you go alone is flexibility.

These two hills were considered the evening before but I didn't finally decide to go until I awoke next morning. See what I mean about flexibility? And it continues.

Looking at these hills on the map two options had occurred:

1. Take the shortest there and back route for each one from the nearest road access point treating them as separate walks, driving in between.

2. Make a circular  walk which would include several kilometres walking on the road, and would also need a decision for clockwise or anti-clockwise.

A seventy mile plus drive demanded a 7:00 am start. Arriving at the road starting point for Harnisha Hill I had still made no final decision. The obvious ascent followed a fence line directly to the summit and looked boring. I drove steeply downhill the three kilometres to the starting point for Bollihope. Only then I decided that I wouldn't be including that trudge in my walk!

I opted to ascend Bollihope first and decide which way to go when I got to that trig. BUT, during the ascent I realised how stupid I had been about the road section - it was illuminatingly obvious that the return route from Harnisha could be made in a direct line, downhill cross-country all the way and no boundary walls or fences.

From the map I could see that the traverse on a rising-contour* from Bollihope to Harnisha crossed  a multitude of deeply cut stream beds with only a vague definition of a watershed which may have made for easier ground. The going was tough. The whole of this seven mile plus walk was pathless and varied from cropped grass to tussocky grass to heather, and the stream beds turned out to be deeply cut peat hags -  I must have crossed twenty or so, often having to search up and down to find a viable crossing point.

That was all an interesting challenge and I took masochistic pleasure in negotiating this complicated terrain in as expedient a manner as possible. If I had had a companion I think I would have been worrying about their possible discomfort, and worse, displeasure, and maybe conflicting opinions for route finding. One exception would be my friend BC whose laughter and good humour would have increased in proportion to the depth and width of the peat hags.

If I mess up on my own there are only my thoughts to consider.

I was startled on a dozen or so occasions by explosive loud churking* grouse arising suddenly, often within a foot or so from my feet. Rabbits were scampering off at speed as I approached. Lapwings circled above, vociferous and casting their shadows around me on the ground. The sun was shining but a cool wind made for comfortable walking. At the car I had considered a light windproof shell, but switched to my Paramo jacket in view of the chill, and I was thankful later, not doffing it until after midday.

I spent a restful twenty minutes at the second trig with my flask of coffee and a sandwich looking at immense tracts of wild moorland extending many miles in every direction and no sign or sound of human presence. The cross country brainwave decision for my return route was still pathless but grassy sections linked heather and reed outcrops and it was just good to be there - that was the making of a satisfying circular walk when my initial ill-considered planning had suggested a dreary three kilometre plod on tarmac, and a good walk spoiled.

* obviously illogical, but I like it and I think it says what I mean
* a new word made up by me 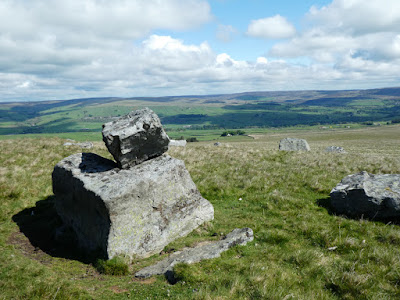 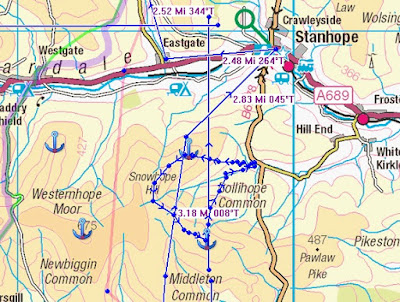 Ha - I wondered how long your recuperation would last - good to see you did not permanently disable yourself with 'shin splints' etc. (whatever they are) that your reported - and, seeing you were romping over Durham moors, that you didn't spring any more hidden traps - to say nothing of abandoned coal or lead mines.
Sounds quite a nice walk - your knees must be in good shape to cope with the tussocks and hags of that terrain: bodes well for your summer campaigns.

gimmer - I think "quite a nice walk" sums it up - not exceptional which would likely be achieved by more careful selection rather than being driven by the overall objective of this little campaign.

There were some traps seen but in disrepair or not set, but still demonstrating an ambition to create a sterile environment for grouse alone and the amusement of those who take pleasure in slaughter.

It sounds like it was s very satisfying walk what with negotiating peat hags and the pathless terrain. Lovely photographs too Conrad.

afoot - you are obviously a connoisseur appreciating the delights of climbing in and out of peat hags and thrashing through ankle grabbing heather, reeds, and bracken - a fellow masochist perhaps?

Sir Hugh - well I certainly enjoy rough ground, and the Grahams and unlisted hills provide plenty of that in my experience. Maybe we walkers are all a bit masochistic when you think of what we sometimes go through in pursuit of a top or on a long trip. And we keep going back for more.