Yesterday I forgot to mention  the fishing match. There was one in progress as I walked down the canal, but only about six anglers. How often have you seen them and thought “I bet they never catch anything.” Just as I arrived one of the guys netted what he said was a large breem and I didn’t disagree. I suggested he should be in line for a win but he replied dourly “early days.”

Further on two cruisers came into view - they were from the Willow Trust who I think look after kids with problems. I waved my poles and had a very cheery response from them all - it’s heartwarming to see a bit of good being done.

All was good also at the Tudor Inn where I ate and camped in August 2013 whilst walking the Severn Way. Paths crossing again.This being another bank holiday weekend I had a lot of trouble finding accommodation and had to go off my plotted route to the Alveston House Hotel south of Rothbury
which meant a lot of time re-plotting on Memory Map. Although it was nearly 14 miles  much was flat and on minor roads. One section across fields had a dreadful collection of stiles. I ended up trespassing into the back door of a children’s adventure playground with animal attractions, crazy golf and much more including for me a café - coffee and shortbread cherry sandwich - not bad.

When I choose photos Blogger does not put them in the same order. I have taken many more and hope to do a good slideshow with captions from home. The first photo is a cricket pitch facing onto a main road and not far from wicket to  boundary. If there have been no road accidents to date I reckon it is only a question of time.

The next one is just a bit of long grass across the whole extent of a field supposed to be a public footpath. The third is a stile - the photo foreshortens. The approach was a deep trough and the fencing leaned back towards one, impossible for me to climb; I squeezed between the bars. 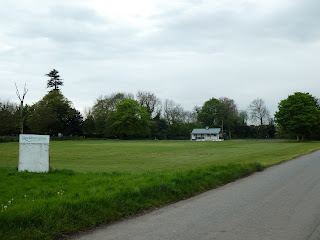 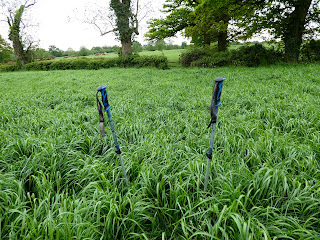 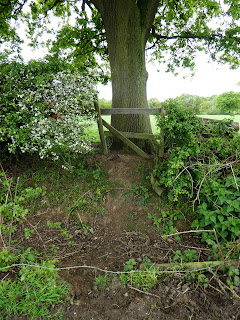