The road from High Bentham to my rendezvous with BC and friend J must rate in the top ten spectacular roads in the UK crossing eight miles of wild undulating moorland and then descending a deep cut valley with the road cut out of the hillside, all unfenced with no margin for error - what a good start to the day. The road continues in similar fashion from our rendezvous point for another three miles to Slaidburn.

We planned to circumnavigate Stocks reservoir. The  paths and associated infrastructure have been improved and made into a popular walk, and from what we saw, an excellent running circuit. The history and statistics of the reservoir's construction in 1932 are fascinating, more interesting than similar accounts I have read and well worth a read*.

I had imagined a path close to the perimeter all the way. Not so -  it must have been almost an hour before we saw water. From our starting point the path crosses the river Hodder by a splendid wooden footbridge and then wanders through pleasant countryside with a modest bit of climbing before coming closer to the reservoir. We visited a hide and saw a good variety of birds, albeit at a distance.

Countryfile recently, heartbreakingly highlighted the loss of over ninety percent of the UK meadowland over the last few decades . Well meadowland was abundant all over this AONB showing a great variety of grasses and wild flowers with many orchids of varying specimens.

We lunched on the dam wall and watched a number of anglers fly fishing both from the bank and from boats. The reservoir is well stocked with the various varieties of trout. We actually saw one guy catch and land a trout which he returned to the water.

Our return on the other side on an elevated path gave extensive views of the reservoir and our outward journey on the other side - it is always gratifying to see behind you a large part of the route that you have been walking.

If anybody is looking for a really good seven to eight mile walk this is worth travelling some distance for and particularly enhanced today by good company and summer weather. 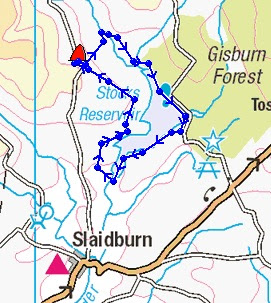 *Thanks to Wikipedia (I do donate a small amount from time to time)
It was created in 1932 by the Fylde Water Board by flooding the Dalehead valley and the surrounding farmland, including the hamlet of Stocks-in-Bowland from which the reservoir derives its name. At the peak of the construction project, over 500 men worked there and most of them lived in a temporary village called Hollins.  Prince Georgeofficially opened the reservoir by unveiling a commemorative bronze plaque.
During the construction phase, the reservoir works were the site of an extensive 3 foot (914 mm) gauge industrial railway system which linked the dam works with a railhead on the Long Preston - Slaidburn road (Bowtell, 1988). Nearby stone quarries were also served by the railway. Steam traction engines hauled building material between the Tosside railhead and the water board depôt adjacent to Long Preston railway station.
The reservoir is located in the civil parish of Easington. In medieval times, the area was granted to the monks of Kirkstall Abbey near Leeds. Later, Stocks-in-Bowland, Dalehead and Easington all came under the sway of the Lordship of Bowland.
Posted by Sir Hugh at Saturday, July 13, 2019

Yes that was a good circuit, almost makes me get out my running shoes again.
I think the black caterpillars become Peacock butterflies.

BC - I agree about the impulse to have a run again, it is something that I do miss, but common sense must prevail (in this instance.)

there are such things as weeping beeches - one at Acorn Bank - which, by the way, is an NT property well worth a visit for/by : archaeologists, antiquarians, botanists, geologists, mining engineers, milling engineers and wood gear makers, fruiticulturalists (?) , apiarists, architects, arboriculturalists, good time guys and gals and UTC and all sorts of other -ists.

gimmer- Yes, I have found out since about the weeping birch. I have put Acorn Bank on the "To Do" list. It is close to one or two of my remaining trigs on your map so all could be incorporated, including a visit to K. I see from their website that you can hire a mobility scooter for your look round -sounds like a good plan?