Bowland Climber has been re-exploring the Bowland Fells recently. We have both walked over this terrain during a twenty year or more period, BC more than me, but both our memories have dimmed, and certainly for me no records kept. I recommend to anybody younger to keep records - you will value them later in life.

BC had ascended Birkett Fell some years ago - he even remembered struggling to find a couple of stones amongst the thick heather to make a mini cairn on the high point.

We started from Dunsop Bridge, reputedly the centre of Great Britain:

"Ordnance Survey have declared Dunsop Bridge as the official centre of the United Kingdom. The village phone box commemorates this fact and was unveiled by the famous explorer Sir Ranulph Fiennes on 29th June 1992."

That sounds definitive, but just you look at Wiki:

It is much more nerdy than you would believe including heady stuff about CENTROID LOCATIONS - have fun.

A line of elegant, majestic tapering pine trees lead into the parkland of Thorneyholme Hall alongside the River Dunsop. I have never seen that species of pine before and they are impressive.

A snippet from some stuff about Thorneyholme Hall made me chuckle:

"St. Hubert is the patron saint of hunters and the Forest of Bowland was once a Royal Hunting Forest. According to legend St. Hubert’s conversion to the Catholic faith took place on a Good Friday when, while hunting a stag, he saw a vision of a cross between its antlers and heard a voice telling him to seek instruction in the Christian faith."

I think he must have been on the wacky-backy  or something stronger?

The gentle saunter alongside the pretty River Dunsop belied what was to come. After climbing on a good path away from the river we cut off, beelining for our summit. The going was steep and knee deep amongst huge grass tussocks, bilberry and heather. At the summit BC was pleased to see the two stones he had placed there a number of years ago.

Birkett Fell is unusual in having a covering of surprisingly large beech and other species twisted and gnarled into weird shapes - seen from a distance one understands why it has been referred to as the Jockey's Cap.

BC's previous visits had taken a path through a wood after our summit. The wood had been almost completely wrecked with trees broken and splintered off at varying heights and lying in random directions making it impenetrable - it reminded me of Paul Nash's war paintings - there must have been one heck of a storm to wreak that destruction. 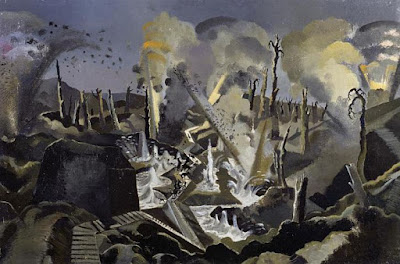 We had difficulty in finding an alternative route involving "modification" of some wire fencing.

After exiting the wood we found a sheep with its horn stuck in a metal gate - there was no way it would ever have extricated.  I perilously climbed the gate so I could lift the sheep's rear while BC manoeuvred the horn, then the sheep was off with a bleating "thank-you." It was only then that I noticed a ladder stile right next to the gate.

Next we encountered a farmer digging a drainage ditch with a tractor from which he dismounted eager for conversation. He got my prize for "Biggest Moaner of the Year'" Everything was wrong and denigrated in an irritating whiny voice: off-comers buying local land, The Duchy Estate, Chris Packham, the decline of sheep farming, previous occupiers of his farm, and other subjects I can't remember - once he got going he was on a roll and it took us a while to get away and find a spot to munch, drink, and recover.

The rest of the walk through this  excellent countryside finished with a pleasant chat with a girl awaiting a rendezvous with a Duke of Edinburgh party. To fomish BC treated us to a welcome cuppa at Puddleducks Tea Room in Dunsop. 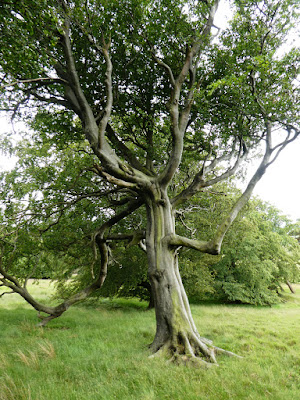 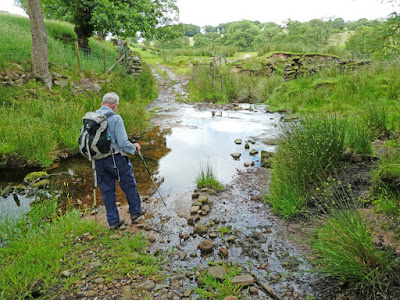