Predictions had been issued for the hottest day of the year. After driving an hour and a half from 7:00 am it was only registering 16/17 degrees. When I started walking it was the same and I felt the need to wear a light fleece (unzipped) on top of my Rohan Expedition shirt. That fleece remained until halfway back from Shacklesborough summit. I had been denigrating the forecasters in my mind, but  It was not long before I was apologising to them.

The heat built allowing me to ascend Brown Rigg Moss in pleasant warmth, but by the time I was descending after midday it was uncomfortably hot. The car had been left (with no option) in full sun. The only thing I could do was set off immediately with the air conditioning turned on but it was excruciatingly hot and sticky, but not as bad as my worst heat encounter ever on the SW Coast Path:


It was only about twelve miles to Kingsand and I opted for an 8:00am breakfast - I should have known better.Mr. Board dropped me off back on the path and it was uphill between hedges and bracken immediately on an awkward path. It was incredibly hot and I was bothered by buzzing flies, little black flies that bite, and the occasional horsefly that bite like hell. Within twenty minutes my shirt was exactly as it would have been if I had taken a shower, yes, the whole shirt and I do not exaggerate.
After leaving the B6276 on my way from home my route wound its way down nerve-racking country lanes between Selset and Grassholme reservoirs and then crossing the dam between Balderhead and Blackton reservoirs. There were places where meeting another car would have demanded much dexterity - such problems loom larger as age advances, but I was lucky.
Parking at the other end  of the dam had a feeling of remoteness and silence - not a place to break down. Before setting off for Shacklesborough I chatted to a fly fisherman who was tackling up in the pursuit of wild brown trout only. Many waters these days are stocked with the larger Rainbow trout which are not indigenous, and somewhat inexplicably I had a good feeling that only  brownies lived here - it seemed appropriate to the wilderness feeling of this location.
A track on the map showed for only a couple of hundred yards before dwindling into a footpath, but as I walked  it continued. I met a couple coming the other way (early starters I reckon) and they told me the track now lead right to the foot of Shacklesborough which they had come from climbing. Weather had been sultry with flat light poor for photos, but the views down Balderdale were enhanced by the three reservoirs, and the trig had a bonus gentlemanly cairn companion to give more interest to my photo.
I couldn't see the white limestone hardcore track from the summit and felt impatient to bother trying to find it again - it had not been comfortable to walk on. I beelined back across fairly easy going moorland to round off an enjoyable two hours walking in isolated and majestic surroundings.
I had to drive over six miles round the two easterly reservoirs to the cul de sac car park at the end of Blackton reservoir where the Pennine Way path would give me access to Brown Rigg Moss. I had no recollection of this section from walking the PW in 1987, but I did have an interesting encounter near here at the time:
27th April 1987 - Pennine Wsy
I think it was on a short road section just past Balderhead Reservoir that was quite steep and I was really toiling and sweating when I came to farm buildings on the right. There was an aged farmer's wife type doing something rather strenuous like throwing bales of hay or shovelling manure. I stopped and passed the time of day. I was very struck by this lady. I asked if I could fill my water bottle and she insisted I sat down and rest while she went off to fill the bottle. The lady came back with a stool for me to sit on and also  some tea and biscuits. What I really remember is an overwhelming aura of kindness from this lady. She told me she was a widow and had looked after the farm for some time since loosing her husband. She was obviously living a very hard life physically, but she was just a fabulous kind person. I later deduced that this must have been Hannah Hauxwell who was later identified and taken over by the media. She was whisked  off all over the world making TV appearances and publishing books about her life. I think the emphasis was on the fact that she had never travelled outside her own environment in all her life, and she was living in a kind of time capsule, but given the chance she was articulate and given to making wise comments about the modern world. Because it was only afterwards that I realised who she was I had not made reference to her in my daily log which was written on the spot, but my memory of her writing this ten years later is still vivid.
I was pleased to find the PW path was still just a modest track climbing up over the moorland with no serious erosion. I do wonder how much the PW is walked these days - it is a fine long distance route and has not become a scar on the landscape on sections I have walked recently.
I followed the PW to its high point then struck off on a boundary line for this second trig. As I arrived a huge four engined military propeller plane came over at only two hundred feet - I panicked with the camera and failed miserably to get it in my sights. 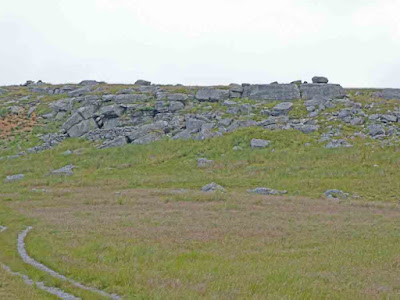 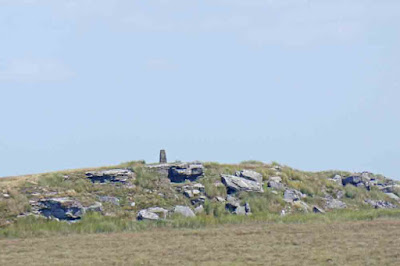