A walk with Katie

I can't believe granddaughter Katie is now seven. On Sunday her mum was toiling under pressure with GCSE marking, so I was off with Katie for a walk. A modest three miler around the paths and lanes in the little hills south of Ings was perfect. I have previously posted about this area, and the rocky summit with a spot height of 249m and a view of a secret tarn was to be our focus towards the end of the walk.

Straight from the car Katie was walking along the top of a partly demolished, rickety dry stone wall with the agility of a circus performer. I had to intervene before damage was done to either K or the remains of the wall. An undulating turf path lead us into a spooky wood - sadly no Gruffaloes were seen. After some uphill roadwork we were onto paths with Katie leading the way much of the time and full of chatter. Back on more tarmac we were taking advantage of a weathered seat in long grass when a small group came by and volunteered to take a photo of us both together.

At a farm we came across a lady and daughter harnessing a small pony. I was asked to stop using my walking poles - their tapping noise on the tarmac had spooked their timid beast - well that was a change from being frequently accused of inciting dogs to savagery by wearing a hat.

We ascended our hill. K was onto the rocky top well ahead of me. A strong wind nearly blew her over, but with hair streaming she was shouting with glee and  waving, full of fun, then the hat I had lent her blew off causing even more laughter and a wild chase for its retrieval.

We descended fifty feet and hunkered down behind a wall for sandwiches and cake. Whilst I had no doubt Katie was enjoying herself I was still  surprisingly pleased when she said "Can we go back to the top again?" Well that made my day and off we went for our second visit.

As I picked my way back down over the pathless terrain to the road Katie was way ahead imagining I guess that she was crossing a giant's garden or whatever.

Back on the road we found one of those helium balloons on a wall. Katie recognised this as litter and told me we should take it away with us, but first it needed deflating - she took it to the road and with great delight jumped on it making a satisfying loud pop.

As we descended we were anticipating seeing the car below and I was teasing Katie with the possibility that it wouldn't be there. The suspense mounted and the car only revealed itself from the folds of the landscape in the last fifty yards.

Café Ambio (the one at Ings, not the auction mart one where I go with Pete) provided more cake and drinks to round off a jolly adventure. 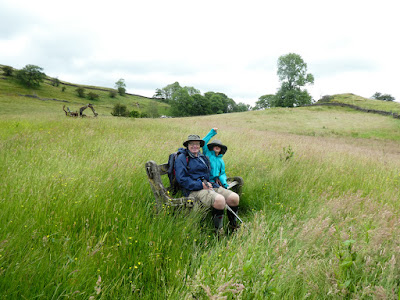 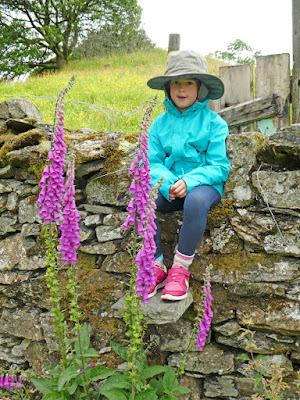 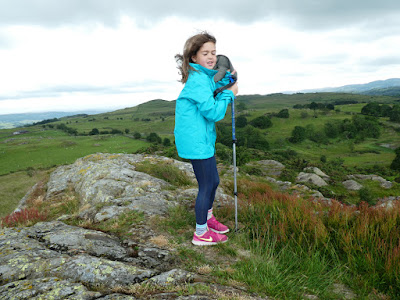 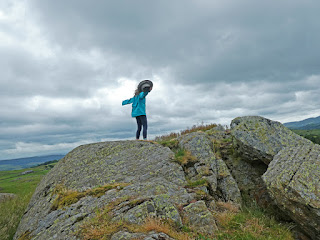 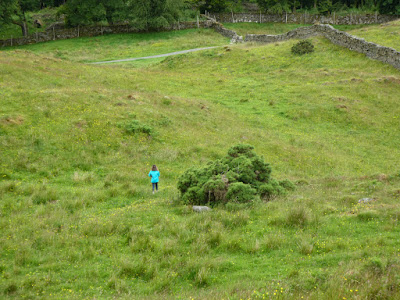 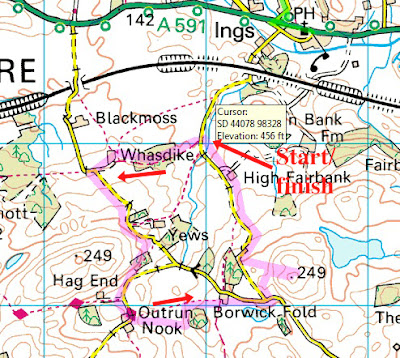 Katie has shown from the start an interest in drawing, painting and artwork in general. I have shown her the basics of Photoshop Elements on several occasions. Back at my house she asked to play on Photoshop. I opened a blank page for her and left her to it and she produced the picture below with no input whatsoever from me.