Thankfully the taxi arrived at 7:40 am and took me to the start. I started walking at precisely 8:00 am. It was still a bit chilly but a cloudless blue sky bode well.

As expected all the walking is flat with one or two gentle exceptions. All the paths are well tended with friendly surfaces - not a tractor track or horse and cattle plugging to be seen. I don't ever remember walking a whole day on good paths.

At one point I could hear dogs and thought I must be nearing kennels, but then the howling and screaming went up to fever pitch then silence. Then in the distance I saw something bright red in the wood at the edge of a field a few hundred yards away. There was a female on a horse with the full hunting pink jacket - I'm nor sure why they say pink when it is bright red. There were three or four foxhounds  with her and they were scouring the surroundings. My conclusion was that this lady was out on her own private hunt and the noises I heard were undoubtedly the result of something being killed - ugh!

A bit further on I met a dog walker who had done quite a lot of serious walking in the UK and the Alps. I mentioned the hunting lady and he said we should have a new sport of hunting and shooting the hunting pink brigade.

The walking has been varied through woods, tracks and paths in short sections which maintains interest and creates the illusion of progress.

I am now in The Park Hotel at Diss having walked a most enjoyable 14.5miles.

I will try one again to show some photos but do not intend to try adding captions. 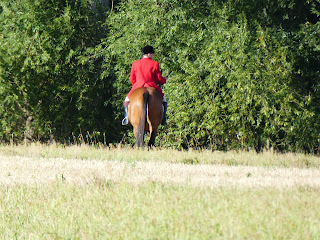 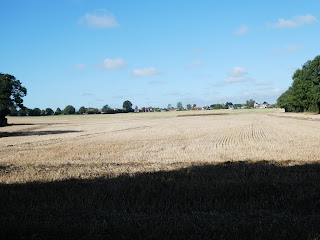 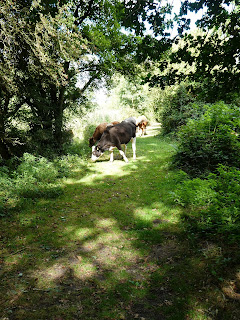