As I drive around my locale I often notice side roads that I have not explored and wonder where they lead to. I must have driven the A6 between Carnforth and Lancaster hundreds of times during the twenty odd years I have lived here. A few days ago I found myself driving this fairly boring urban development, and midway a road sign tells me I am passing through Bolton-le-Sands.  One of those queried side roads does lead off to the left and I make a note to look at the map back at home. I find a narrow lane leading south from a village just off the A6 - it is relatively flat and looks ideal for a walk with Pete.

We park the car opposite a strikingly different church and disembark. We are in a village set back in time with ancient buildings where fancy carved stone lintels with dates and difficult to read ancient English script seems to have been a popular fashion in this village spread over a century or so. I realise this is the real Bolton-le-Sands which has been engraved on my mind for the last twenty years as a characterless chunk of modern mishmash spread along the old A6. What a delight.

I am so enchanted with all this that I have us heading off out of the village on the wrong road. Whilst I am photographing an old school an elderly lady is passing by using a walking stick, but quite sprightly and we have a group of three chat mainly about getting old and the need for keeping going. Pete proudly tells the lady he is eighty-five and that I am seventy-nine but we are promptly sandbagged when the lady tells us she is eighty-nine.

Our proper road has a "Road Closed" sign as we leave the village - I generally ignore these assuming they relate only to vehicles. The road is lined with ancient large trees for the first half kilometre with substantial detached posh modernish houses sporting large well kept gardens. Then we are out into open country. After another half kilometre hazard tape crosses the road and beyond a huge pile of cut down shrubbery blocks the whole width of the road and behind that a trail of several tree stump bowls interspersed with other debris. We manage to pick our way through. It is obvious that someone has tipped this lot from a vehicle with the root ball stumps dropping off as the vehicle keeps moving then the rest has been heaved out into the big pile. We wonder who has taken it upon themselves to close the road and what arrangements may be in progress for clearing this fly-tipping.

Further on we meet a mountain biker coming the other way and we tell him about the blockage. His name is Sean and as a kindred spirit has had a lifetime of outdoor pursuits, I say a lifetime but he is only sixty. Sean is on the verge of having a knee operation and he is apprehensive and doubtful but I hopefully encourage him. He says he can't walk but he can cycle, and at that point I reckon having a replacement knee is a no-brainer.

We walk nearly to our lane's junction with another lane before turning and walking back. We have abandoned the rest of the Lancashire Cycleway because of difficult logistics and questionably unsuitable terrain for Pete - it looks as though there may be potential for a further excursion around newly discovered Bolton-le-Sands. 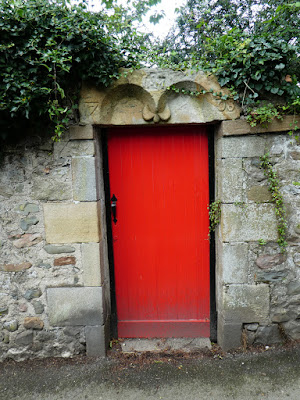 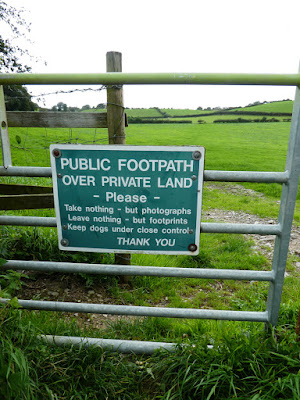 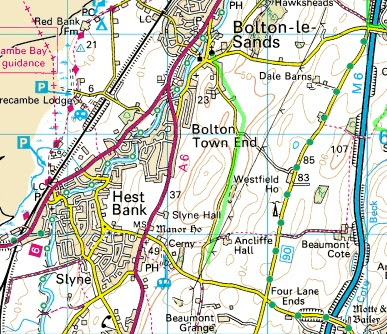