Following my trawling of the past in my last post I also unearthed this little adventure from 13/15th July 1984 just a month or two after that Carlin Gill saga.

I mentioned in a reply to comments on that post that I would advise youngsters setting out in life to keep records. They will much appreciate that in later life.

Verbatim from my records:

This plan was formulated the year before with Tom on our Sgurr- na- Ciche trip.

Ladhar Bheinn in Knoydart is a remote peak requiring a long march from any direction.

The original plan was to take the ferry from Mallaig to Inverie, but it transpired that there was no reliable return journey during the weekend.

It then occurred to me that I had the Mirror dinghy, and with an outboard motor we may be able to approach by boat.

After some thought there were two possibilities. The first was from the North, launching at Corran, but although a short distance it seemed to involve a more open sea crossing not suited to the Mirror Dinghy, and the second plan was to launch at Kinlochourn which we settled on.

We set off from Tom's parents at Grange-over-Sands at 6:00 p.m. with the Mirror dinghy on the roof of my Ford Sierra. and a newly acquired Yamaha 2 h.p. outboard engine in the boot. We arrived at Kinlochourn in the dark at about midnight and tried to get some sleep in the car - this is never a satisfactory business.

After a quick breakfast we launched and packed the boat and we were away by about 8:00 a.m. on the high tide. About halfway we put into a small island to refuel and unfortunately struck a sharp rock fracturing the plywood hull of the boat - this was not too serious, but it meant we had to keep bailing as we motored on. We saw seals popping up to have a look at us, and we saw a salmon or sea-trout leap about two feet clear of the water.

Our intention was to land at Barrisdale Bay, but on the falling tide we ran aground on a shoal  about half a mile out and it was apparent that entry to the bay was not possible without knowledge of the exact location of the channel. We eventually landed at Inbhir Dhorrcail to the North West. The weather had been fine and was improving. By 1:00 p.m. we had pitched the tent and were ready for off after a quick lunch.

We ascended by Creag Bheithe - long and steep all the way - a great ridge with magnificent views into Glen Barrisdale and Loch Hourn. Eventually the way was barred by the daunting steepness of Stob-a-Chearcaill which rises sheer for 500 feet or so in a series of grass ledges divided by almost vertical rock walls. There seemed to be no alternative to climbing this so up we went - it was not difficult but certainly demanded care and concentration with one or two small scrambling sections where moves had to be made. At the top we were in some mist and worked out a compass bearing to prevent us from getting down the North East ridge of Choire Chorrcaill which we had noticed on the ascent. All went well and we progressed  up the magnificent summit ridge with the mist clearing, giving us superb views accross to Skye and Rhum.

We reached the summit and  visited the separate trig point and then ate, and dealt with a miniature of Glenmorangie that my daughter Jill had given me at Christmas, which I had been keeping for a suitable occasion.

We descended by the unrelenting Stob a Choire Odhair which is the North East arrete of Ladhair Bheinn leading directly and steeply down to our camp site for 3000 feet or so. We saw a number of deer on the way. At the bottom we were crossing a grass meadow and my legs buckled underneath me and they were just like jelly - I couldn't have been very fit, but it was a very demanding descent, and no it wasn't the whisky!

We were back at the tent about 8:00 p.m. and proceeded to make repairs to the outside of the boat's hull with Elastoplast daubed with Nickwax, and this enabled us to make our return trip to Kinlochourn without much bailing the following morning. From Kinlochourn we drove straight home.

I had done a round trip of 720 miles and got back in time to see Jill win an important swimming race we had been anticipating for some time.

CERTAINLY WORTH CLICKING FIRST PHOTO TO SEE AS SLIDESHOW DESPITE BLURRY IMAGES FROM 1984 TECHNOLOGY EVEN THOUGH THEY WERE 35mm. SLIDES (SINCE DIGITISED) 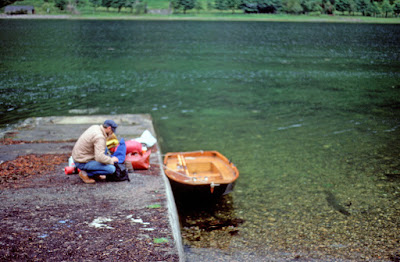 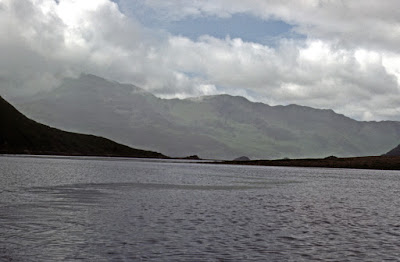 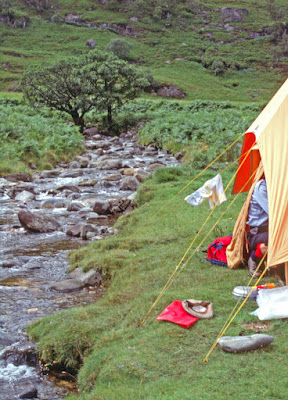 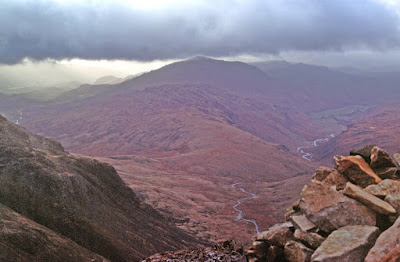