I am walking this in daily sections with friend Bowland Climber; he has already done this section so here I am playing catch-up on this first section from Blackburn where Wainwright was born.

A long early morning drive down the A59 with the sun in my eyes had me at Whalley, the finishing point,  to catch the 9:29 am train to Blackburn. Waiting on the station I had interesting conversation with a chap who was a walker and also a motor sport enthusiast. The meeting of the Wainwright Society at Stavley recently had coincided with car racing at Oulton Park where he has a season ticket. Ouulton Park had won.

I knew what to expect walking out of Blackburn up the long straight Audley Range with terrace rows of small Asian shops, many boarded up, and at halfway a prominent purpose built mosque. One greengrocers in particular had a massive eclectic stock of vegetables, but predominant and in your face, and by far the largest stock was their display of brightly coloured onions (must say something about Asian cooking ingredients?)

It took a long time to get out of  the town. As I  hit the towpath of the Leeds Liverpool canal a darkly clad chap who I didn't like the look of was about fifty yards ahead of me (I had seen him closer just before descending to the path.) I found I was walking marginally faster than him. I didn't want to reduce my pace, but to speed up and overtake would need considerable effort, and then I would have to maintain that uncomfortably faster pace to stay in front. I did speed up and overtake at which point he offered no greeting and I pressed on marching hard. I didn't want to obviously look back too often. The canal passed through various industrial complexes and I hoped he would peel off which he did after about a mile, but being pressed like that spoilt a bit of my enjoyment of the pleasant canal ambience.

Leaving the canal by a farm track I was soon climbing hard and high on deep grass to the skyline to reach Tan House Farm, prominent and exposed as I approached.

Passing by the farmyard there was an old bath more or less on the path. I have been intrigued for years about the frequent use of these items by farmers as watering troughs for livestock in the fields. In normal domestic circumstances it is usually the lady of the house who natters for refurbishments and decorating and the like, but I suspect at farms it is Mr. Farmer who nags the wife - "don't you think it's time we had a new bath" with his thoughts on a water supply for a new field just acquired from Farmer Jones. I wonder if there are  statistics for bath purchase by occupation - I reckon farmers would come out on top.

The ridge took me to a short section of road and where I left this was a perfectly placed bench for lunch timed at 12:30, so I sat and had coffee, cheese with beetroot and horseradish chutney sandwich and some cake, all in the warmth of the sun with extensive views below a  cloudless blue sky.

An old bridleway continued to follow the high ground until it suddenly descended to reveal pretty Dean Clough Reservoir with distant Pendle Hill framed beyond.

I descended then traversed above the far side of the reservoir. A long quiet road section followed then tracks which opened out to give a wonderful view of Whalley far below. A steep descent on the road and a trek through the town with its posh shops had me back to the station and my parked car. This would be an excellent introduction to the walk and I envy somebody perhaps from abroad undertaking this with no prior knowledge. 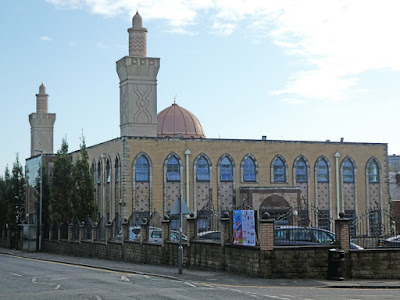 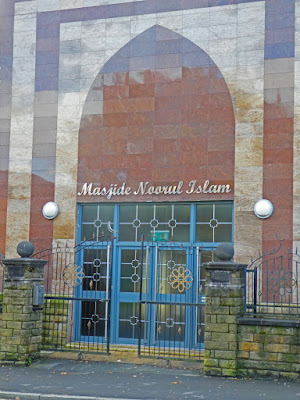 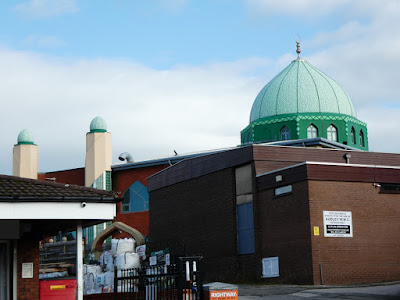 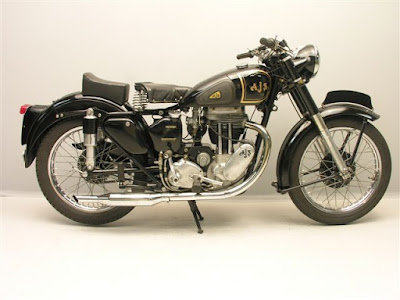