.
Whilst I was trekking the Angles Way in Norfolk I learned that Bowland Climber had happened upon Wainwright's Way. The route is described in Nick Burton's Wainwright's Way (recommended) and starts from Blackburn, Wainwright's birthplace, and  heads north to take in the locations of W 's sketch books, then into Kendal where he spent most of his walking and working life, and finally through the Lakes to Haystacks where W's ashes were scattered.

BC has already completed three of the sections in day walks so I have some catching up to do, but I was invited to join the project and slot in for the moment on the stage from south of Longridge Fell to Dunsop Bridge.

Using two cars we had long drives before we started. The weather was exceptional with clear blue sky and a clarity for views as good as any I can remember.

Plodding up the back of Longridge Fell was a shock to my system after seventy odd miles of flat in Norfolk. We met a small party at our visit to the trig. Oh! Did one of them ask the right question of BC?  "Have you walked that ridge over there?" pointing to the classic stretch from Fair Snape along Totridge fell. BC devised his own Skyline forty odd mile route of which the aforementioned forms a small part. BC has walked this route several times, and whilst he is normally a modest chap I reckon this creation is one achievement he is particularly proud of, so he was easily launched into comprehensively answering his interlocutor.

From that trig we could see the whole wide expanse of our route spreading northwards bisecting the broad River Hodder valley with Dunsop Bridge, our goal, just hidden in the distant fold of hills. Our descent down the northern slopes of Longridge Fell was steep and followed the course  of a Roman road and that gave me a strong sense of history and wonderment at the scale of the Roman occupation which prevailed throughout the walk.   What an experience it would be to have a helicopter flight over that terrain at that time in history?

Much of the walking was over livestock fields still gloopy from much recent rain making for hard going and slow progress, but what an uplifting landscape of well defined hills and rich colours.

We diverted slightly to look at the stepping stones at Stakes farm and found a bench to stop and eat. The stones were awash with the fast flowing Hodder and I asked BC if he would have attempted a crossing. At first he thought he may, but then retracted, anyway it was a good job this was not on our route.

Stake farm is early seventeenth century and Grade 2 listed, but they appear to have attached a brick built extension in one corner involving removal of two large mullioned windows - I guess they never got permission for that. There is a plaque on the wall with a latin inscription - see photo below. Two  separate Internet translators revealed the following two incomprehensible translations:

"Now my but later someone on that he was born."

"Now my just this but later I know he was born."

I bow to academia.

We passed The Inn at Whitewell after having a look at the church and took a slight variation on the last bit via the 1882 water pipeline bridge leading to Dunsop.

As we walked on the farm track leading to the road in Dunsop, BC on my right, let forth a sudden loud exclamation at which I was sorely startled - marching with head down BC had looked up and found himself looking directly, at a range of about a foot, into the face of a large black cat sat uncomfortably on top of a fence post. The cat, as they do (or don't), showed no reaction and watched us pass by. Ten minutes later, as we drove out passing the end of the farm track the cat was sat in the middle of the track, we supposed bidding us farewell.


Click here for a short You Tube video of our view from the trig: 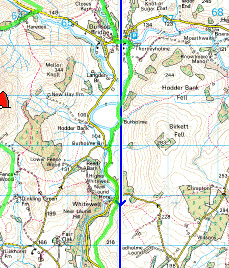