We actually walked elven miles due to a shameful error of navigation at the start which pains me to record, involving us both leaving it far too long to question our non-arrival at a railway bridge shortly after the start.

Wainwright's Way is compelling me to binge photography. I took forty two photos and two short videos. With great self discipline I whittled photos here down to seventeen.


We both agree that W's Way would be a perfect introduction to English countryside for a newcomer, say from abroad. It illustrates history of the Industrial Revolution, follows medieval byways and villages largely unaltered for centuries, and follows canals from time to rime and takes a trip through the remote Bowland hills and moorland, and on this section follows the attractive River Kent into Kendal. The fringe area of the Lake District, of which I am particularly fond, provides a gentle prelude to a grand finale tour through the Lakes, arguably our most impressive national park.


From Holme the flat fields of Hale Moss were not all waterlogged - a kilometre further south there are virtual lakes, but we splodged and laughed our way occasionally diverting round areas of standing water. Farleton Fell stood out behind us, perhaps he/she was laughing also?

A string of interconnected paths and tracks elevated to the west of the A6 avoids walking up that road to arrive at Beetham. The Heron Corn Mill which we have both previously explored is worth a visit here.

I was now on home ground walking through Dallam Estate deer park, yes we did see the deer. When I had my own Springer and later  looking after my daughter's I walked these areas more frequently - it was good to be back.

We skirted Milnthorpe on paths, roads and tracks though Heversham and Leasegill that were unfamiliar (to me at least) - that seems to be an ingenious achievement of this route. We crossed by a high bridge the track of the railway link from Arnside to the West Coast mainline at Hincaster closed in 1972. As I can now get on a train at Arnside direct to Manchester Airport, or change at Carnforth to get to almost anywhere, I reckon that line was one which Beeching was justified in closing.

The popular path high above the river Kent through Levens Park is impressive including an eclectic mixture of huge mature trees, and with the added attraction of Bagot goats and wild, black fallow deer - surprisingly we saw them both. Oh how I wish I could cover the ground like those deer.

The empty stretch of the Lancaster canal further on presents the bizarre sight of a canal bridge stood uselessly and illogically in the middle of a field, but good to see that it has not been demolished.

As we approached the end of our walk the river Kent flows through a gorge with the most turbulent water I have ever seen anywhere. BC was so impressed he clambered down onto an exposed view point for better photos. I timidly stayed put and took a couple of videos of the two slightly separated sections.

I had been here before, here is my quite interesting post:

For the two videos:

Worth clicking first photo to see rest as slideshow 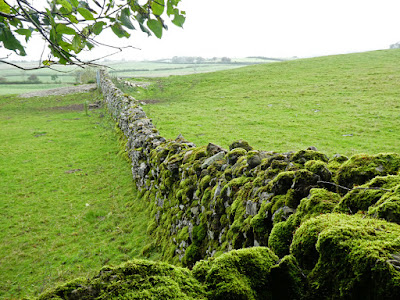 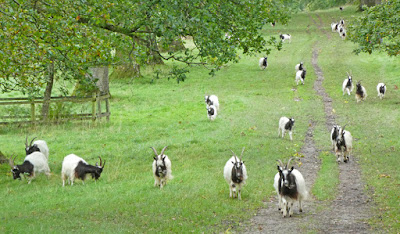