With an ongoing walking project both BC and I like to make progress in a reasonably continuous manner and we don't see it as vital to wait for ideal weather windows for each outing, but there  has to be a line drawn somewhere, and we wouldn't want to walk on a whole day of nonstop rain, but today rain was forecast for the morning and clearing for the afternoon. As it happened the clearing did not come until mid afternoon so three-quarters of this walk was done in rain. But we were both well equipped and were still able to enjoy the attractive and changing scenery starting with the dramatic inundation of the River Wenning thundering under its Hornby bridge on its way to join the river Lune a mile further downstream.

The going was mainly over a series of green sheep pasture humps undulating quite steeply and we huffed and puffed a few times. I was concerned about my camera being damaged by rain and I held back on photography, and for some reason I can't define that continued even after the weather had cleared. I didn't count the number of stiles but there were many and almost without exception they were difficult and mostly in bad repair, and the planks were greasy with wet green slime adding a further potential for drama. BC was patient as I struggled with many - they (whoever) seem to have designed them at a height precisely calculated to be one inch more than a replacement knee can bend but I can't complain too much and remain thankful that I can continue with these outings at an age when most cannot. Just past  Gunnerthwaite farm there was a footbridge (SD 559 733) with a "bridge closed" notice - it was in a bad way, but I, being heaviest, went across on the slippery planking whilst BC wisely waited for me to finish rather than increasing weight on the bridge.

At SD 552 753 Ordnance Survey mark a "Meter House" and we found a little wall to sit on for our luncheon. We could see a prominent mountain way in the distance which puzzled us. I took a zoom photo and then a compass bearing (directly north-west.) At home I projected this and realised it is a remarkable view of the Scafells thirty miles away in a straight line.

Not far from our luncheon stop the Wainwright's Way takes an illogical trip south west south of Old Dalton Hall, but no matter, it is attractive iconic English parkland and a delight to walk through. There was a splendid decorative iron gate with fancy cast-iron pillars which epitomised the wealth of these estates in times gone by. Bespoke wood moulds would likely have been made, after all the lord of the manor wouldn't have wanted to have the same designs on neighbours' estates.

We dallied a while in Burton-in-Kendal with its old market cross and many  buildings reminiscent of the days when this village would have been an important port of call and stopover for coach travellers. The buildings line the road closely and of course it would have been a rough track then and easy to imagine today in this largely unaltered village.

A final stretch took us up the Lancaster canal and the fields west across to the A6 were as heavily flooded as I have seen. I was now on familiar home ground and will continue to be so for a lot of the remainder of this walk, but surprisingly, from looking at the route, on many paths and  tracks I have not previously explored.

This is proving to be a worthy route and will continue so becoming more dramatic as we get into the Lake District. 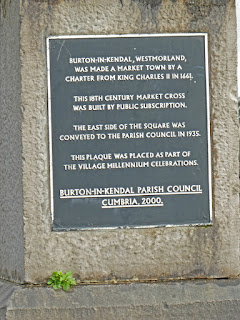