All too often I find myself reminded of Rum Doodle in my own context.  The cliché about men not being able to multi-task was well demonstrated as I was driving us back to our start at Hawes Bridge after depositing BC's car at our destination. I was relating one of my anecdotes to BC, for the umpteenth time I suspect, and drove straight past the turn off down the narrow lane to Hawes Bridge and had to proceed on the dual carriageway to return via a roundabout thus loosing us ten minutes. Even so we were off to a good walking start at 9:15 am.

A combination of the River Kent in full flow and the pathway of the filled in Lancaster Canal took us into Kendal. Nick Burton, creator of Wainwright's Way obviously had to take us on a stiff ascent to Kendal Castle. We had splendid panoramic views of Kendal below and the castle with its formidable moat, albeit waterless, The castle still has structure to see and stands unassailable on top of its hill. We chatted to a couple of dog walkers amongst a scattering of other visitors and made our way down into the town through Abbotts Park and into the high street. The town hall where Wainwright was borough treasurer was sighted as we turned off to climb endlessly, first by road and then by steep limestone terrain to gain the ridge of Scout Scar.

Halfway up the road part there was a mock Norman arch gate in a high wall between stone buildings with a stonemason's plaque proclaiming "SCOTCH BURIAL GROUND - 1760 - 1855." The door was locked so our curiosity was un-satiated but I at least was left to my imagination, and dare I say it thought again about the potential excavation the size of an Olympic swimming pool filled with bottles of whisky, but would they be full or empty? Unfortunately I reckon the stonemason would not have had access to Mind the Gaffe - the Penguin guide to common errors in English by E. L. Trask, but there again that book does seem to refer to English and not Scottish.

Sod's Law prevailed as a violent rainstorm hit us during the comparatively short time we were on the most exposed part of our walk. We hoped for shelter at the Scout Scar gazebo structure towards the other end but it was well occupied and not offering much protection so we plodded off to cross the road onto the start of Cunswick Scar, and then a descent to the lower undulating levels for the rest of our day.


Worth clicking first photo to see all as slideshow 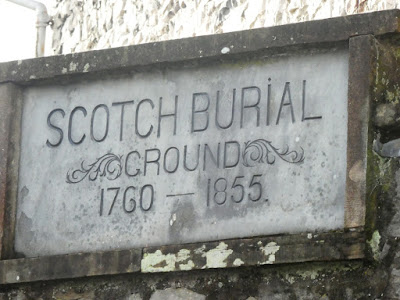 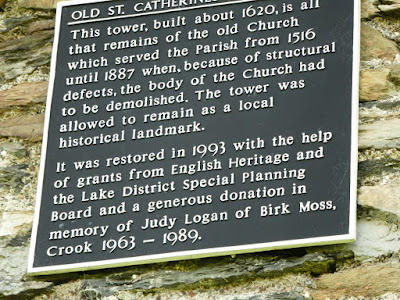