A few months ago I had a series of forays from the end of Salter Fell road up Roeburndale to Wray and Hornby to fill in the part of Wainwright's Way that BC had done previously. On one of those trips BC accompanied me and a high level path above and to the east of Roeburndale took our interest so today I went to investigate.

There was a lay-by for parking at the bottom of the steep hill up to Roeburn Methodist Chapel. from where a track leads to Lower Salter Farm. There I messed about trying to find the route through the farmyard and found myself within the first ten minutes of the walk climbing a gate.

The majority of this walk was on public footpaths shown on the map but not visible on the ground. I was traversing rough upland pasture choked with high reeds and long grass which is pretty evident on the photos below. This was all hard going with lots of short sharp ups and downs. Many of the gates were awkward and I made a hash of some of the navigation. I climbed several gates and a couple of barbed wire fences and all in all it was as a tough six miles.

I can't think of another country walk with such continuous stupendous panoramic views in all directions. There really was that Top of the World feeling nearly all the time and the hard going only seemed to enhance the feeling of this being a worthy project.

How many times have I photographed Ingleborough? It is similar to Heysham Power Station - visible from so many different directions and long distances on  so many walks. Today I took a zoom shot of the summit in cloud. Only when I downloaded back at home I noticed a small speck of a bird in the sky - enlargement showed it to be huge. It must be bigger than a buzzard so what on earth was it? See photo below.

I often agonise over finding somewhere to sit comfortably for my sandwich and coffee. With my two bionic knees it is not easy to get back up again if I just sit on the grass. Today I found a stile that looked as though it was built by Desperate Dan. The lower step providing a seat at perfect height and the upper a perfect table for my flask and mug with distant views to the Yorkshire Dales hills.

That northern part of  Bowland Forest* really does provide magnificent scenery and some of the most extensive views I know of outside true mountain country.

* "Forest." For my overseas readers. That word is misleading but often used to describe a large area of more or less treeless hill country probably going back to The Middle Ages. 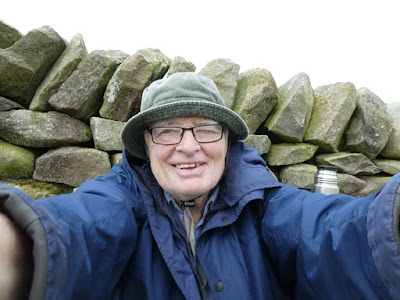 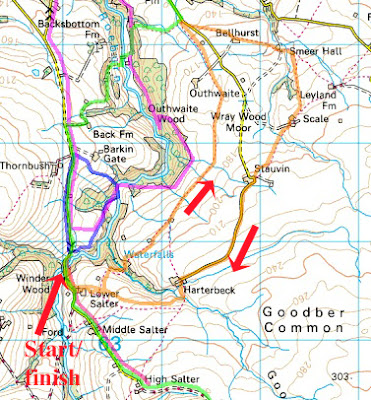 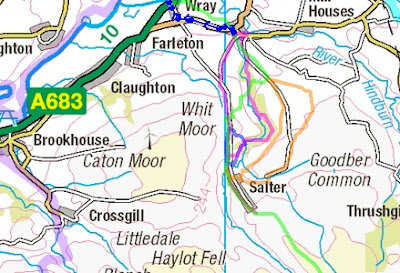