Today I had one of those wide ranging conversations with my brother on the phone -  how the subject of my boot repairs on the last  few days of my Land's End John 'O Groats walk in 2008 arose I can't remember. As I thought more about it I realised that the two days covering that event encapsulated much of what is best in a long distance backpacking trip: the welcome hospitality, sense of adventure, overcoming challenges, and walking into previously unseen magnificent landscape, especially in the wilds of the remotest part of Scotland.

The two days described below from my journal were perhaps the best I can remember on any of my long distance trips, but I think with a tinge of sadness knowing that this seventy seven day trip was very nearly at its end.

The guide followed forestry roads and “a little used path often difficult to follow”, and missed out The Crask Inn. I didn’t like the sound of this and opted for the twelve mile slog up the road from Lairg to Crask.

The cyclists from the camp site passed me and stopped for a chat in the rain.

A bit further on a motorist offered me a lift which of course I declined. This was one of only two occasions on the whole trip.


The Crask Inn is a classic country pub welcoming walkers, fishermen and travellers in general. Mike the landlord is obviously an educated and gentlemanly type, but he is also a shepherd and keeps some cattle as well as running the inn with his wife. There is no television and Mike told me they thrive on books and music.

When I arrived Mike asked what my priorities were and I said a cup of tea. He said he had to go out to collect his assistant Christine seven miles away, but if I went to my room to leave my sack there would be a pot of tea waiting for me in the bar when I came down.

In the bar I found a cup and milk and a large slice of fruit cake on the table, but had to search for the teapot which I found keeping warm, along with a jug of hot water, on top of a wonderful wood burning stove. On the table Mike had also left a little book of 1920s vintage detailing the amounts of ascent and descent on all the roads of Scotland, a real labour of love from some unidentified author.

Later Mike looked at my maps and gave me valuable information about bothy accommodation on my route (he is an active member of The Mountain Bothies Association).

A group of four men from Lancashire in their sixties arrived in the bar. They had been coming here to fish for over twenty years and had seen a few landlords off, but said that Mike was the best.

We went to dine in the dining room and were joined by the four cyclists. Everybody had a few drinks and conversation flowed between us and we had a merry time. I had smoked haddock scrambled egg as a starter then roast venison with good fresh vegetables and proper gravy, and finished off with rhubarb crumble – this was all excellently prepared.

For me The Crask Inn was everything a good pub should be except for the lack of a good draught beer, but there was a fine selection of quality Scottish bottled beer available which made up for that.

Parked in the garden there was a strange trailer contraption with shafts and a harness, two wheels at the back and a steering wheel at the front, and with a hooped canopy looking like a mini Wild West wagon. I found out that this belonged to Rosie, and below is an explanatory snip from her website:

Who Rosie is, and why she is running around the world.

From Rosie: On the 2nd of October 2003 my 57th birthday, I'm going to set off to run around the world. I shall be solo, self supporting and on a very low budget. My dearest wish anyway, is just to do a complete circle of the earth. The death of my husband Clive from prostate cancer, taught me more than anything about how precious life is; how short it can be, that you HAVE to grab life, do what you can while you can, and try to give something back.

I'll be trying to raise awareness of the following very special charities...

I took some photos and was told that Rosie was visiting friends and so I did not meet her. I was amused about all this because my brother Rod had suggested to me that perhaps I could pull my stuff behind in a trailer instead of using a rucksack thereby enabling transport of more gear and in particular water, and I had dismissed this idea as too farfetched.

There is a good level path which rises to cross the bealach over to Loch Choire.

Descending the other side of this pass the sole of my right boot came off from the instep back to the heel. I spent three quarters of an hour making a hole through the edgof the sole and the rubber welt and then inserting a zip tie. I used most of the tools on my Swiss Army Knife.

This was a real quality walk through great Highland scenery. I stopped at a bothy on the edge of Loch Choire which was really an estate worker’s hut containing various materials. I found an old paint can and removed the plastic strap like handle for a further repair to my boot.

The bothy at Gearnsary had been pointed out to me by Mike and was not an official MBA one. It was a single story old cottage being used as a barn. Things were a bit dirty and messy, but I tidied up and arranged two pallets to make a bed raised off the stone cobbled floor. There was a door on trestles forming a table to cook on, and two plastic garden chairs, and a majestic raised stone fireplace. At the back I found a box of kindling wood and newspapers, and outside I found quite a lot of thick dead wood from the odd surrounding trees and I lit a really good fire. Things became quite cosy.

Next I made further repairs to my boot extracting two screws from a bolt still attached to the door/table and fixing the plastic strap I had salvaged from the paint tin under the instep, and then screwed into the sides of the rubber welt.

I cooked a meal and then it started to rain.  I was apprehensive about the next two nights when I would have no option   but to wild camp which could be unpleasant if bad weather prevailed.

Photos from old Powerpoint format with black background - too lazy to crop that out.
Suggest click to enlarge if you want to read the captions 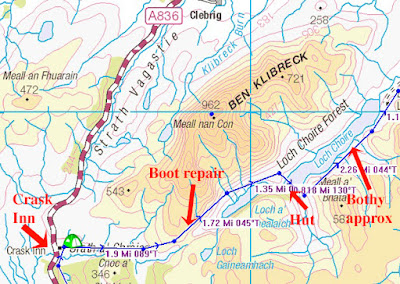