Studying Ordnance Survey maps has taken up a large, but pleasurable amount of time during my life. Identifying some unusal feature often provides an objective for a walk and many posts here have been so inspired.


Today I was excited to see a "Roman milestone" shown in the Lune valley north of Kirkby Lonsdale, an area I have been exploring recently.


I parked just before Rigmaden Bridge which crosses the River Lune, now surprisingly large considering the short distance from its source. I went to have look before setting off in the other direction.


I soon left tarmac onto an old sunken lane which at one point was an active but shallow stream for about fifty yards.


The public footpath passes through Hawking Hall Farm farmyard. A gate barred the way but a farming youth appeared and set about untying the gate fastening made with that awful orange hairy string much favoured by farmers. Once you have tied a knot it is difficult to undo because hairy strands from other parts of the string interfere with the bit you are trying to manipulate and I had a little chuckle to myself as I stood and watched the struggle.


I marched on and for some reason I had now forgotten about the Roman milestone which had sparked my plotting of this route. The milestone was about a hundred yards off the footpath up a steep grassy slope according to Ordnance Survey, but my attention was distracted by The Church of Holy Ghost at Middleton now in view across the field.
I had a mooch round the churchyard but due to Big C the doors were locked. I gleaned the following from the Visit Cumbria website (much edited):


... there are a number of beautiful stained glass windows in this tiny church, and one in particular has an odd ‘mistake’ in its design

...the second window from the right shows Jesus healing a blind man. If you look closely, the blind man has two left feet!

Perhaps Jesus should have sorted the guy's foot whilst he was on with the blindness?

I walked a couple of hundred yards south up the main road before turning off east onto a minor lane. It was just then that I remembered about the Roman milestone - I was cross with myself for missing this anticipated highlight of the day and debated whether to go back, but it is revealing how laziness can galvanise the mind - I realised I could drive back there at the end of my walk and sort it then. One of the old songs sprang to mind:

Approaching Tossbeck farm the footpath had been diverted and my OS msp was out of date. As I was prevaricating in the farmyard. literally only five yards from the diverted path a guy emerged from an open barn and told me I was trespassing. He was an educated sort and a bit ratty, but behind him in the barn I could see a car without a body. After a word of apology for my trespass I enquired whether this was a Lotus 7. He replied informing me that it was a Formila Ford racing car and when I expressed further interest his whole demeanour changed and I was invited in to look at photos of his racing achievements over the years and and having a good old discussion about motor racing before he gave me detailed instruction to follow the rest of the diverted footpath. I do enjoy reversing these initially controversial encounters especially as this turned out to be of more than casual interest.

The rest of the walk was through pleasant farming countryside nestling up to the limits of cultivation below the Barbon hills above.

I trudged back to the road. Where I had branched off earlier on the minor road there was s bus shelter. I went to look. There were village notices inside. One of them told me that "The Roman milestone is now in the churchyard."

Well I did find it in the end - it was hardly the most exciting thing I've ever seen but such items do fire the imagination of the doings and the scale of the Roman occupation I still had a lingering feeling of self deprecation at my mishandling of this expedition, but honestly, it had been a good little walk. 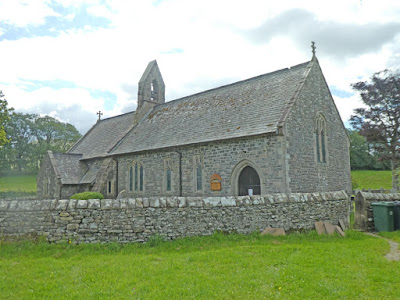 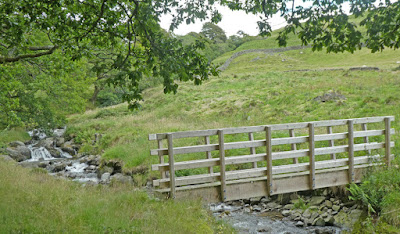 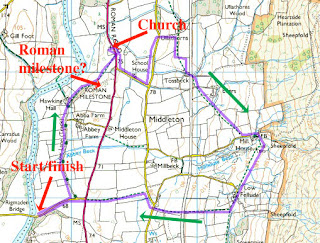