Waterfalls I have not visited (2) - Ease Gill and Crag Hill

Wednesday 29th July 2020 - Ease Gill and Crag Hill ( SD 692 832)
Back in November 2018 my friend BC suggested a walk in the Lakes, the objective being to see a couple of waterfalls - that didn't turn out exactly as planned - see the post if you want:
CLICK HERE
I have a number of unfinished walking projects and more on a vague "to-do" list. In August 2018 I walked up the lower part of Ease Gill from Leck to where I could look down the steep wooded hillside to where the path from Bull Pot Farm joins Ease Gill in a sort of bowl. Much as I was tempted to descend to explore this pothole haven I could see no obvious route and I didn't have time for what would most likely turn into an epic, but a visit there went onto the to-do list along with the ambition to follow Ease Gill back up towards its source.
The drive from Casterton to Bull Pot Farm is on single track road with almost no passing places making for a nail-biting start to the day, but at around 9:00 am I had a clear urn. On the way back I met one car coming the other way just before getting to Casterton and he obligingly reversed for about quarter of a mile - I'm glad it wasn't the other way round.
My walk started from the farm which is the headquarters of the Red Rose Potholing club, a venue steeped in speleological history. I have passed through here on several occasions. The most memorable was on an epic trig point bagging trip when I ended up near Ingleton having run out of daylight with no hope of getting back across country to Bull Pot. Fortunately son and daughter were summoned and I waited in the Wheatsheaf at Ingleton for them to come and drive me back to Bull Pot.
We have had heavy rain recently and I had high hopes of drama picturing myself climbing up the sides of vigorous waterfalls and making dicey crossings of the beck. The track from Bull Pot to Ease Gill was running with water which supported my anticipation.
There was a splendid surprise view down into the bowl of Ease Gill where it turns through almost a right-angle to head north east with Crag Hill overlooking to the north. The descent was steep and needed care.
Initially the path up the gill was away from the water and then when I joined I was surprised to find a dry river bed with a carpet of football sized, and bigger, of boulders. This persisted a long way up the gill and several places where there should have been impressive waterfalls were dry. I dodged from bank to bank where there were faint paths on the grass and some of the time directly up the river bed on the awkward boulders. This being prime potholing country the water obviously runs underground unless here is a deluge to make it flow above and I was surprised not to find that after our recent weather. The gill was not as steeply sided as I had expected but the scenery was dramatic and I would say unique. Eventually the stream came alive with water as the valley sides narrowed. I followed until I could escape to the north onto the slopes of Crag Hill and made the long pathless ascent on rough ground to the trig point. The trig pillar had a strange design sort of stencilled and Googling (only briefly) has revealed no explanation.
The descent straight back to Bull Pot followed a fence line but there were occasions when I had to climb over and there was only a faint intermittent path and much rough reed and tussock hard going. All in all a worthwhile mini expedition and a pretty tough six miles. 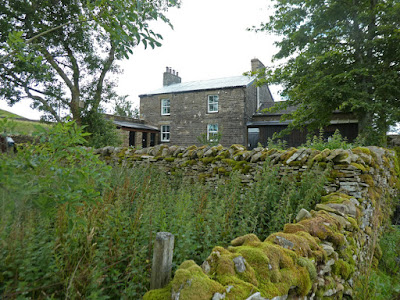 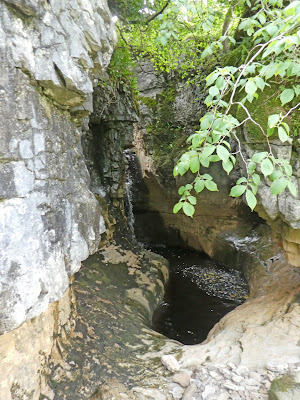 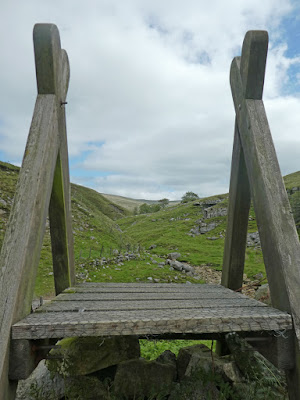 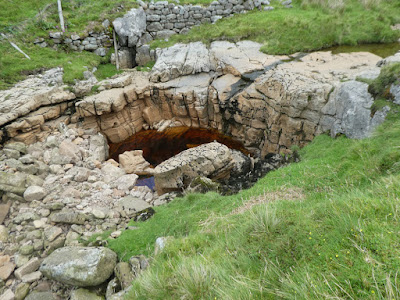 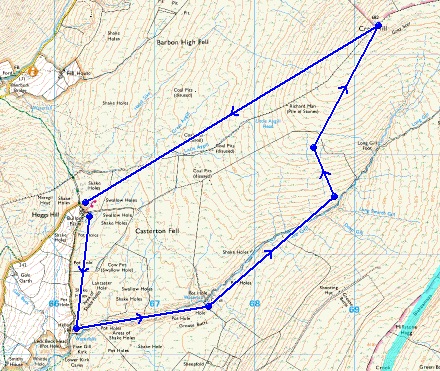