Woodman Lane from the Highwayman

As I become more conscious of plotting routes that are comfortable for Pete I started looking at the profile facility in Memory Map and quickly discarded a couple of possibilities which seemed to show lots of steep ascent, although I had not read that from the contours.

It is only as I messed with the map for this post I realised the profiles can be whatever you want just by stretching their boxes - here are two extremes for this walk:

We have now had two or three weeks with hot sunshine and no rain. This morning I looked at the BBC weather app and it predicted thunder and lightning at precisely 6:00pm -  similar predictions have been remarkably accurate of late, but that would be no problem for us as we are finished by 4:00pm.

We have often eaten well at the Highwayman from where Woodman Lane departs. I asked permission to park and conscientiously put the car at the far end of the large car park on its own.

We walked and chuntered in oppressive heat and humidity - our lane mostly nestled between high  hedges giving us only occasional ripples of the faint wind.

Rest Harrow Equestrian looked impressive - a newly built complex for horsey people with an unbelievable list of facilities including:

If I were a horse I would want my owner to have me stabled there .

At Overtown we found a welcome bench and sat for a while and then decided to return before we had reached Cowan Bridge. There is an interesting network of paths around here which may provide more pleasant walking for me later, along with investigation of the strange perfect circle shown on the OS map (see map below.)

Back at the Highwayman, despite having parked at the most remote part of the car park another car had parked close on the passenger side, and another so close on the driver's side of my car I could hardly open my door and only managed to get in with a huge amount of squeezing and difficulty. There were many double and treble open parking spaces all over the carpark. My goodness - I was so angry. If I had been a paying customer at the pub I think I would have  gone in and identified this prat with a likely fisticuffs outcome.

As I dropped Pete off at Storth where he joins his wife from her painting class, dark broody clouds  threatened over the bay but the thunder and lightning didn't materialise, but as I type this at ten next morning rain has started, albeit a bit feeble, but welcome for the garden and wildlife. 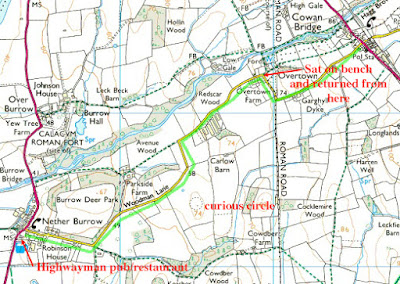